Posted at 06:08h in Reviews by thinktank_admin
0 Likes

“LIKE MOST MEMOIRS, HOW TO DRESS A DUMMY IS A NARRATIVE OF AN INDIVIDUAL’S PATH TO SELF-DISCOVERY AND ACCEPTANCE.”

I think sometimes even women who identify as feminists are occasionally guilty of making assumptions about other women, especially those in the public eye, based on how they dress, how they use social media, or what they do for a living.

I’m not saying every woman does this all the time, or that the judgements are always negative. But don’t we all, to some extent, think that because a woman puts her image out into the public domain, she becomes something of a willing target for public scrutiny and judgement? I think if we’re being honest, the answer is ‘yes’.

But what we often fail to consider is what it must be like for these women to sell themselves – their image, their persona – so that they ultimately become a product, rather than a person. What must it do to their sense of self, to become solely identified with their image, while their other personal attributes – their minds, their feelings, their skills – are overlooked, and their worth measured by purely their saleability?

These are some of the issues explored in Cassie Lane’s revealing new memoir, How to Dress a Dummy. The book traces Lane’s modelling career, from being talent-spotted in a Melbourne shopping centre, to her appearances in big name fashion campaigns.

It lifts the curtain on the infamous partying trends of models at all levels, and reveals the pressures placed them; to be thin, to be beautiful, and to be willing to do anything on a shoot, even if it compromises their values. Lane’s revealing memoir recounts the sexism, objectification, and depersonalisation she encountered working in the fashion industry.

It also shines a light on some of the less glamourous elements of modelling, like endless castings, being sprayed with cold water in freezing conditions, and the continual battle to maintain an unhealthily low weight. 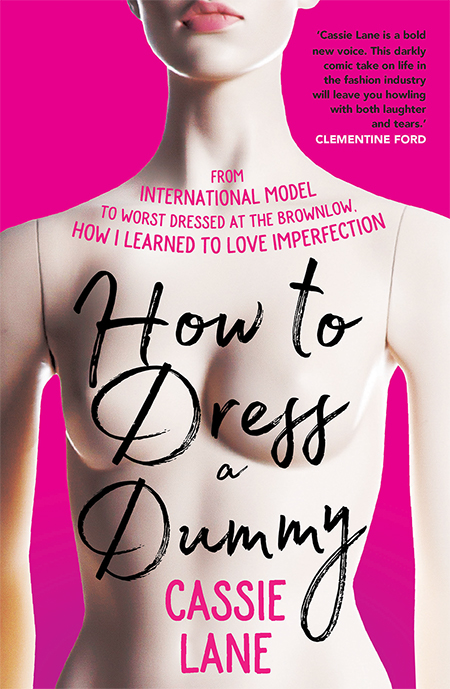 However, the book is not all heavy exposition. Lane punctuates her writing with many funny anecdotes and proves herself an interesting and talented writer in her evocative language and lively characterisation. Though it is easy to disapprove of – and yes, to judge – the young Lane portrayed in the book, it is also impossible not to sympathise with, and relate to her. Like most memoirs, How to Dress a Dummy is a narrative of an individual’s path to self-discovery and acceptance.

As a young girl who never felt she fit in, Lane’s story is touchingly honest, as well as surprisingly relatable, as she humorously and thoughtfully recounts the many misadventures and misdemeanours which make up her personal journey through (a somewhat prolonged) adolescence.

How to Dress a Dummy is at times confronting, often funny, and unexpectedly poignant. It reveals so much about its author, without giving a finite impression of her, suggesting that Lane, like many of us, is not one single character, but many, each trying to fit within a circumscribed set of social norms. It is a thoroughly engaging book, and suggests that in future we should expect more great writing from Cassie Lane.